Johnny Bravo is the main character from the series Johnny Bravo. Despite his many clueless attempts, he is, unrealized by himself, a total failure at his chosen profession: chasing women. He also lives with his mother, aptly named "Mama." Johnny is constantly pestered by little Suzy, a little red-headed girl, who often avoids the troubles Johnny becomes involved in. Johnny is also "friends" with Carl, though often Johnny seems to loathe him.

In the Future, Johnny is nowhere to be found and was most likely defeated or captured during the later portion of Fuse's invasion.

In the Past, Johnny Bravo was originally stationed in Townsville Center. He can now be found in Orchid Bay next to Finn. He can also be found in Dexlabs, preparing for his Nano development.

Johnny Bravo was first hinted at with the first release of the game, which included concept art for Johnny Bravo in Goat's Junk Yard and Orchid Bay. In addition, a picture of him was available as a FusionFall Official Forums avatar. Johnny Bravo first appeared in FusionFall during the Birthday Bash. He was then moved to Townsville Center, where he was part of the 2010 Valentine's Day quest arc. He was removed after the event.

Mother of all Blowfish

Johnny Bravo was seen again, still in Townsville Center, for the Mother's Day event in 2010.

Johnny had a Nano of himself made for the first update after the Academy was added. Though he shows little interest in the Nano project, DexLabs Lab Assistants were able to extract some DNA and create a Nano based on Johnny. 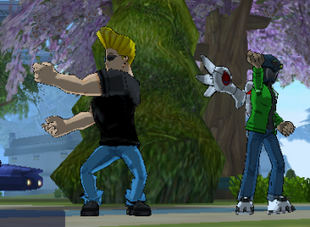 Johnny dancing with a player 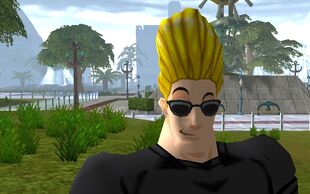 Johnny Bravo
Add a photo to this gallery
Retrieved from "https://fanonfall.fandom.com/wiki/Johnny_Bravo?oldid=20537"
Community content is available under CC-BY-SA unless otherwise noted.