Hokey Pokey Woods is a location where many animals and people live. Taokaka is there, having heard that there was free food everywhere -- given the (obviously false) rumor that pizza grows on trees. In addition, Bridgette left Total Drama Island both to help the animals in Hokey Pokey Woods and because she liked the name of the place.

When it is rumored by Lil' Arturo that Buttercup has given up on being Belladonna, he sends the player to the Hokey Pokey Woods to find her, but it turns out that he has actually mixed her up with Vanessa Doofenshmirtz, who was transported to the woods by her father's Fusioninator.

Bugs Bunny and Daffy Duck also came to the woods, apparently to get away from Yosemite Sam. Hokey Pokey Woods is a level 84 area. 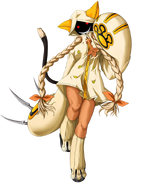 Vanessa
Community content is available under CC-BY-SA unless otherwise noted.