FanonFall: A FusionFall Fan Fiction Wiki
Register
Don't have an account?
Sign In
Advertisement
in: Real world, A to Z 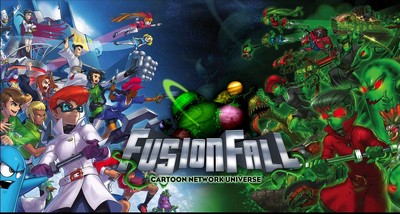 For the first year, the full game required a subscription; free accounts could only access to a portion of the content. The game became free-to-play on April 19, 2010.

In FusionFall, the player takes control of a customized avatar. Their character is viewed from a third-person perspective with an overlaid HUD. The game has large playable environments, with travel facilitated by various warp points. There are many glitches and secrets to use in the battle against Lord Fuse and his minions. Gameplay primarily focuses on the alliance between the heroes and villains of the Cartoon Network universe, featuring characters from Cartoon Network shows both past and present. Many characters are available as mentors after players complete level four of the game. The four mentors are Dexter (from "Dexter's Laboratory"), Ben Tennyson (from "Ben 10 Alien Force" as well as the original "Ben 10," and "Ben 10: Ultimate Alien"), Edd (from "Ed, Edd, and Eddy"), and Mojo Jojo (from "The Powerpuff Girls"). Playing past level five originally required a monthly paid subscription in the form of redeemable cards that could be purchased at participating retailers. The cards were rendered obsolete after April 16, 2010, when the entirety of the game became free to play; players with unredeemed time cards were offered a refund for their unused cards. If the player reaches level 50 out of 100, he or she can play as any character in the game.

When it was first released, FusionFall required a paid subscription for the full game, with a limited portion of the content available to free accounts. Free accounts could only play in the "future" portion of the game, which only allows players to collect four nanos and create two characters. The full game had a total of 36 nanos before the new extensions. The game now has a more than 40 nanos. To create up to four characters, players had to earn all 36 nanos during the beta testing. Players with characters that progressed into the past during the sneak peek or during a previous subscription had their characters locked until a current subscription was purchased.

Subscription plans included one-month, three-month, year-long, and family plans. The FusionFall Victory Pack Exclusive was made available for purchase when the game was released. It contained a four-month subscription, as well as a game guide, T-shirt (if bought from GameStop), and exclusive outfits and weapons for the player's character. The Victory Packs were eventually discontinued, having been replaced with one-month and three-month game card available for purchase at Target outlets.

The game was made completely free on April 19, 2010, making everything a member could have available for free.

In 2011, the game gave the player a Clockwork set (not based on Clockwork from Ben 10). It only counts for subscribers and can only be accessed with a code.

A comic prequel, co-written by Matthew Schwartz and Megas XLR co-creator George Krstic, entitled FusionFall: Worlds Collide!!, was passed out during Comic Con '07. Due to the overwhelming success of the comic, George Krstic is in talks to write a script for a FusionFall feature based on the comic to accompany the game's launch. The manga used to be available on the official website for public viewing and in PDF format for download. It covers the events leading up to the start of the game.

Occasionally on certain holidays such as Thanksgiving or Christmas, FusionFall has a small in-game celebration that usually has a special code for a holiday item, holiday scenery, exclusive items, and missions carried by special guest appearances of future cast members, such as Chowder or V. V Argost. Events for holidays stretch from 2 weeks to several months. Some roll directly from one to the other. Other additions FusionFall now has are new Chowder, Generator Rex, Ben 10 Ultimate Alien, and Adventure Time missions, npc's, areas. They erased the future, and put in a new area called the Academy where the player trains.

The following voice actors have done voice work in this game, and every character, except Aku, has been voiced by the actor who played that part on that character's respective television series:

Community content is available under CC-BY-SA unless otherwise noted.
Advertisement