FanonFall: A FusionFall Fan Fiction Wiki
Register
Don't have an account?
Sign In
Advertisement
in: Candidates for deletion, A to Z, Fanon Locations,
and 3 more

This page is a candidate for deletion.

If you disagree with its deletion, please explain why at Category talk:Candidates for deletion or improve the page and remove the {{delete}} tag.

Remember to check what links here and the page history before deleting.

Crisis Peak is a segment from Zack's World, transported to the Cartoon Network Universe. This place has massive amounts of Fusions. To the north players can find The Archives with the Archives Infected Zone. Deep inside the peak is the Crisis Core Infected Zone, where players will find a portal to Galactus Universe, besides several Fusion Lairs. Zack assigns players a Level 100 mission.

Heroes are sent here at Level 52, though it is possible to enter the area as soon as the Zack Nano is made available. Though Crisis Peak is a hollowed out volcano featuring massive lava streams and spurts of flame, it is still possible for players to enter it and to follow the fiery pathway down to the core.

Monkey Skyway Agents are stationed next to the peak. There are also portals there from the Forsaken Forest and Peach Creek Commons, watched over by Mordecai and Alejandro, respectively. 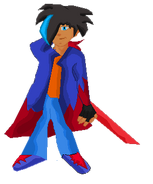