FanonFall: A FusionFall Fan Fiction Wiki
Register
Don't have an account?
Sign In
Advertisement
in: NPCs, Characters, Females,
and 8 more

Blossom is one of the Powerpuff Girls, sister to Bubbles and Buttercup, and their leader in The Powerpuff Girls cartoon. Their "father" is Professor Utonium, who created her and her sisters via a combination of sugar, spice, everything nice, and Chemical X. Blossom is the most intelligent and mature of the three, but at times the most bossy, and acting at others a bit like a nerd. Among the girls, Blossom has one special skill that the others do not possess, the power of "Ice Breath," which lets her breathe out cold air and create ice.

Blossom has long, fiery red-orange, waist-length hair with a triangular part and bangs and pink eyes. She wears a pink dress that has a black stripe in the middle with white tights and black Mary Janes. She has a red bow on the top of her head and a heart-shaped hair-clip that can be seen from behind

According to the FusionFall manga, when Fuse first attacked, Blossom and Bubbles saved Numbuh Two and Numbuh Five from the Spawns while Ben and Numbuh Two retrieved a part that was missing for Dexter and Mandark's laser. They later tried to prevent the ship from crashing, but unfortunately failed, leaving Fuse to further his attack.

In the now non-existent Future, Blossom and Bubbles are not heard from after the fall of Tech Square, hinting that Fuse's minions might have killed them in the process (the movie in which the player arrives too far into the future shows Blossom and Bubbles battling a Terrafuser) but after three months they appear again.  Blossom helps the player with numerous missions, while also being a task-handler should the player choose Dexter as their guide.

Princess, not being able to become a PowerPuff Girl, attempts to exact her revenge on Blossom, as she is the leader of the PPG's. Princess has the player help her prepare to pull a prank on Blossom, although Buttercup interfers before the prank is successful and instructs the player to stop helping Princess and help stop her instead. 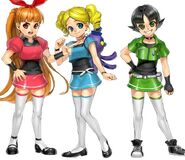 Blossom with her sisters