Start a Wiki
BLUE (Battle Living Ultimate Eliminator) is the robot partner created by ABU who gave him his name. He may look like a cute robot or like Robotboy, but he is a living killing machine. He's stationed at Zeropoint City next to Robotboy.

Blue was separated from his partner and was left at Zeropoint City waiting for his return. Fuse created Blue's Full Power self by using one of Blue's batteries. Blue mmet Zack and misses him, but found Robotboy and they created a robotic alliance with a couple of imaginary Fusions, such as Rive the Fusion Spawn. Zack sends the player on a mission to go to Zeropoint City and find Blue. In Blue's Nano mission "This Is A Robotic Matter" Blue tells the player to ask Rive for another battery or energy source. He'll tell the hero to go fight some monsters to find it. Once that is done, Blue fights with the player until the player is ready to face off against Fusion Blue. Once he has been defeated, the player obtains the Blue Nano. Fusion Blue has a gun and claws; unlike Full Power Blue, Fusion Blue wears black and red like Aku, and his eyes glow orange. 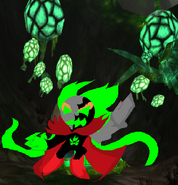 Blue's Nano
Add a photo to this gallery

Retrieved from "https://fanonfall.fandom.com/wiki/B.L.U.E?oldid=18309"
Community content is available under CC-BY-SA unless otherwise noted.