At the time Fuse attacked, all the Avengers except Firestar had left the mansion to go to the Galactus Universe and fight Galactus. Firestar was sleeping when Fuse attacked and got out only because of Ben Tennyson, who warned her in time for her to escape.

In the expansion pack, FusionFall: Infinity War, Iron Man, Doctor Strange, Wong, and the Hulk bring the player to the Avengers Mansion after saving him from Thanos. They reveal that if Thanos collects all six Infinity Stones, he will gain enough power to destroy half of all life in the universe. 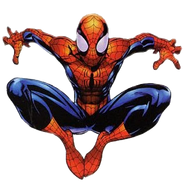 Spider-Man
Add a photo to this gallery
Retrieved from "https://fanonfall.fandom.com/wiki/Avengers_Mansion?oldid=21348"
Community content is available under CC-BY-SA unless otherwise noted.