FanonFall: A FusionFall Fan Fiction Wiki
Register
Don't have an account?
Sign In
Advertisement
in: NPCs, Pokemon, Males,
and 7 more

Ash Ketchum is the protagonist of the animated series, Pokémon, whose best friend and most important Pokémon is Pikachu. Ash is a Pokémon trainer from Pallet Town. He had obtained Pikachu on his tenth birthday from Professor Oak. Since then, the two have traveled together, often with their friends Brock and Misty.

Ash is a determined young boy, but always willing to help those in need. He can get distracted a bit easily, but he sticks to his dream of being a Pokémon Master. His easy-going personality and helpful nature have made it possible for him to make a variety of friends over the regions, though he's made some enemies, too. Among these are his rivals, Team Rocket, who are constantly trying to kidnap Pikachu.

Before Fuse attacked, Ash and Pikachu decided to visit the Cartoon Network Universe and take a break from the Pokémon League; the two have been stuck in Townsville Park since Fuse attacked. Numbuh One requested them to stay in the area and protect the townspeople who still reside in the surroundings of the park. Pikachu helps greatly by using his Thunderbolt attack to destroy Fusion monsters in the area.

Ash's Nano's abilites calls out Froakie, Chespin, and Fennekin. One has a speed move (Agility), one has an attack move (Flamethrower), and one has a stun move (Poison).

FusionFall: The Story of Pike Aftershock

In "FusionFall: The Story of Pike Aftershock," Pikachu is with Ash in Providence. Ash's job in Providence has yet to be announced in-story, but the writer has officially stated that his job will be guidance counselor. 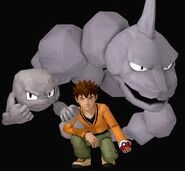