FanonFall: A FusionFall Fan Fiction Wiki
Register
Don't have an account?
Sign In
Advertisement
in: NPCs, Heroes, Aliens,
and 7 more

Alien X is a Celestialsapien, as well as currently the strongest alien available to transform into in Ben Tennyson's Omnitrix and Ultimatrix, and is capable of manipulating reality, time, and space. Alien X is almost always frozen in place due to the arguing entities inside of him: Serena, the voice of love; Bellicus, the voice of anger; and Ben, supposedly the voice of reason.

Alien X recently won the FusionFall Face-Off Contest, against some others of Ben's aliens and has recently been made into a Nano. His Nano recently released along with a Finn and Rex Nano, making them the first new Nanos to be released in the game. His Nano is also the fourth Nano that is one of Ben's aliens, the others being Fourarms, Swampfire, Rath, Ampfibian, and Humongousaur. Interestingly enough, Alien X was seen during the Birthday Bash in the Past and Future. A plush Nano of Alien X can be seen during the Ice King's Palace in "Ice King Invasion: A FusionFall Adventure" along with a plush Nano of Way Big inside of the Ice King's room, which is where the hero warps to after entering the castle. The plushes are on a wall to the left.

Alien X at Birthday Bash in the Future 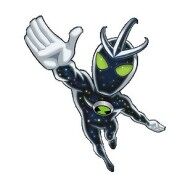